Click on the links below to see where can is. Cam is using the SPOT tracking system and we will post the links as we receive them. Be sure to use satellite mode on Google Maps.

February 18th 7:00 am
Message: South to Cabo and then off to Mazatlan

February 16th 7:00 am
Message: South to Cabo and then off to Mazatlan

February 2nd 7:00 am
Message: on my way to Puerto Escondido for some kayaking

January 28th 7:00 am
Message: on my way to Puerto Escondido for some kayaking

January 27th 7:00 am
Message: on my way to Puerto Escondido for some kayaking

January 26th 7:00 am
Message: on my way to Puerto Escondido for some kayaking

January 3rd 7:00am
Message: Off to La Paz via who knows where.

I left Santa Rosalia early on Boxing Day and raised the main in very little wind. It stayed light until I was outside of Isla San Marco and then it picked up to 8 or 10 knots.

Once I got to Punt Chivato the wind rose to around 12 and I started to make good progress. I caught a nice fish for dinner just as I passed a couple from Colorado who I met last year in Bahia San Pedro and again this year in San Carlos.

I arrived at Playa el Burro in Bahia Concepcion as the sun went down and, after tidying up I had a great meal of pescado al vino.

The next day I explored the bahia and met some people I know from last year. I had a good chat with Gary who does a SSB weather broadcast. He’s a very interesting guy who gets up every morning at 0400 to run a meta-analysis of about two dozen forecast and then adds his own interpretation. When he finishes his 0800 broadcast he plays Amazing Grace, performed on bagpipes, very loudly over his outdoor stereo speakers. The neighbours are either up already or they all use it as an alarm clock.

I got a late start the next day and did not get out of Bahia Concepcion until 1300. From there it was a relaxed sail to Punta Pulpito where I arrived to an empty bay about an hour after sundown. I had BBQ’d steak with shimp and a couple of cervezas before calling it a day.

After some Tai Chi ashore the next morning I had another slow sail to Puerto Escondido where I arrived, again, after sundown.

After checking in the next day I did laundry, had a shower, moved from the fuel dock to a buoy and shot then breeze with sailors in the marina.

For New Year’s Eve there was a nice dinner at the Porto Bello, (sp?), restaurant in the marina complex. A nice Filet Mignon for 100 pesos. As long as one stayed away from the wine cellar and stuck to cerveza it was a very reasonable meal. I had dinner with a couple from Yellowknife aboard Susie and a couple from Half Moon Bay aboard Arctic Willow. We left the restaurant for brandy, music and, conversation aboard Susie before I said Happy New Year and dinghied back to Dream Chaser under the blue moon.

New Year’s day I caught a ride to Loreto for provisions and some excellent shrimp tacos as well as a trip to the bank machine. Fresh caught fish on the barbie and a movie rounded out the day.

Today I went for a good hike up the Steinbeck Canyon. It starts in the desert and gets progressively more lush as you work your way up the boulders in the canyon. When the climbing got too steep for me I had a dip in a pool and headed back to the marina.

After a quick shower and lunch I headed back to Dream Chaser. Jim and Sue on Arctic Willow hailed me as I passed their boat and I stopped in for some fresh baked bread. We chatted for a while before I left with a book by Bernard Moitessier which I will return when I see them in La Paz.

I will sail south in the morning and work my way south to La Paz. Richard Britton will meet me there on the 10th for a week of cruising and sightseeing. It should be a lot of fun.

I spent two weeks in San Carlos waiting for a repair on my engine. A casting broke within the last 150 km or so and that’s how long it takes to do things here. In the mean time I fiddled with the boat, (oiling teak and so on), taking some people sailing using borrowed dinghy engines, hiking, and eating a lot of Mexican food.

When the engine was back on the stern and the forecast was for a steady 10 – 15 knots I headed out early.

I motored slowly out of Bahia Algodones in complete darkness. Once out of the Bahia I sped up to 5 knots and raised the main in no wind. As the sun came up I went below for the last cup of coffee and came back on deck as the wind began to pick up.

The wind rose to 15 to 18 and it looked like I would have a nice smooth ride across. It continued to rise into the low 20s and I put a reef in. Soon it was a steady 28 to 30 and I put in another reef.

The waves got to about 8 feet with some at least 12 as the wind got over 30. I furled the jib but I didn’t like the boat’s motion so I opened it up again.

It was getting very rough and I gave breakfast to the ocean but felt much better after. The rest of the ride was more of the same with a steady 30 to 40 knots all the way across.

I’m sure you have experienced much worse but it was easily the most exciting ride I’ve ever had. Total time dock to dock was almost exactly 8 hours including the slow motoring and a fair bit of time getting the main put away once I got to Santa Rosalia and getting tied up.

I spent today drying stuff and getting things back in order. Now I’ll spend some time here sight seeing and doing Christmas Dinner with the Santa Rosalia gang before heading south. 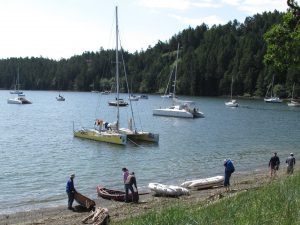